An association must allow all candidates free access to any common area meeting space during a campaign, including those who are not incumbents, and to all members advocating a point of view, regardless of whether or not they are endorsed by the board, for purposes reasonably related to the election. Qualifications for the Board. The qualifications for candidates for the board of directors must be stated in an association’s election rules. The bylaws require that all board members be members or owners within the development, and that candidates be current in the payment of dues or assessment. Additional qualifications may be stated in the CC&Rs or bylaws of the association.

The qualifications for a member to vote must be stated in the election rules. Members are required to be “in good standing” (HOA Dues paid up in full).

Duties of Inspectors of Election

The duties of the Inspector(s) of Election include: Determining the number of memberships entitled to vote and the voting power of each;
* Determining the authenticity, validity, and effect of ballots and proxies, if any;
* Receiving ballots. The sealed ballots must be in the custody of the inspector(s) of election until after the tabulation of the vote, at which time custody must be transferred to the association;
* Hearing and determining all challenges and questions in any way arising out of or in connection with the right to vote;
* Counting all votes in an open meeting of the association; and
* any other duties listed in the law.

The board must deliver (cause to) or send by first-class mail the written ballots and two pre-addressed envelopes, with instructions on how to return the ballots, to every member at least 30 days before the date of the annual election. In order to preserve confidentiality, voters may not be identified by name, address, or lot, parcel, or unit number on the ballot. The association must use the procedures of the California counties for ensuring confidentiality of voter absentee ballots, including all of the following:

Proxy instructions must be set forth on a separate, detachable page of the proxy that can be given to the proxy-holder to retain. The proxy-holder must cast the member’s vote by secret ballot.

The results of the election must be promptly reported to the board and recorded in the minutes of the next meeting of the board. These results must be available for the members to review and publicized within 15 days of the election in a communication directed to all members.

After tabulation, the association must store the election ballots in a secure place for at least one year after the date of the election. If there is a recount or other challenge to the election process, the association must make the ballots available for inspection and review by the members or their authorized representatives if they make a written request. Recounts must, of course, be conducted in a manner that preserves the confidentiality of the vote.

The association’s election rules may not conflict with AB 61 or the bylaws.

2. A proxy-holder vote does not trump a previously-mailed ballot if said ballot is mailed to the Board.

What is an ACH Transfer?

An ACH transfer is one of the main ways to send or receive money online.
Automated Clearing House transfers account for the online bill payments you make to your HOA dues. ACH debit transfers, including payroll direct deposits and most bill payments, are typically free. If you need expedited bill payments, there can be fees.

The simplest way to set this up is to walk over to your bank and tell them you want to set up an ACH bank-to-bank payment. Be sure you have the ROUTING NUMBER  and ACCOUNT NUMBER  of the HOA bank (you can get this from Alpha Management) and your personal ACCOUNT NUMBER (you can get this from your check book). They can set this up for you and you can choose if you want to pay manually online and/or set it up so you automatically pay at a specific day of every month. 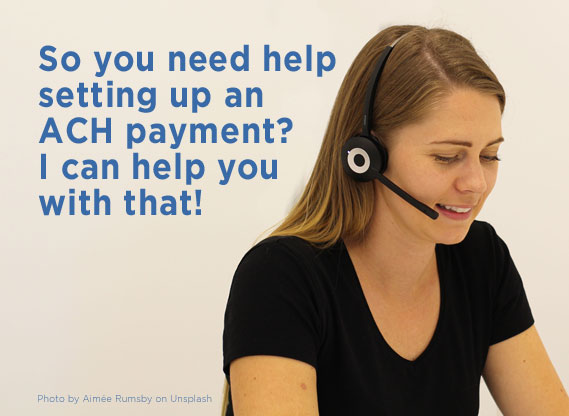 The most important information you should have are:

Sample Procedure to Set Up ACH

Below is a step-by-step instruction on how to set up your ACH transactions online if you are using Chase Bank. We will be using screenshots taken from Chase Bank. Other banks should have similar procedures; but to be sure, please call your bank.

Your bank may warn you that you are being directed to another website, that should be fine since you entered legitimately to your online bank account.

Fill out the following:

The most convenient choice is to VERIFY NOW. If you choose that, you will need to enter the LOGIN and PASSWORD that you use when you go online to your bank.

Choosing to verify in 1-2 days will require a more complex procedure. We do not recommend it.

After you have established this link between your bank and the HOA bank, you should be able to make your first payment. Later you will be able to specify the frequency of your payment.

Note: These instructions are meant as a guide. Procedures may vary with different banks. Alpha Management will not be held responsible for any inaccuracies.

Many think about selling their homes when they are behind in their mortgage payments. If your lender has foreclosed on your home, selling out may not be an option.

After more than 120 days past your payments, your lender can legally reclaim your home. You may actually be forced out of your home. Missing one payment is all that is needed to start the foreclosure process.

Adding to the pain, a foreclosure goes on your credit report and can drop your credit score by as much as 300 points, possibly more. This can hurt your ability to obtain a credit card, auto loan, or cellphone plan, and also prevent you from being able to qualify for another mortgage for many years.

But here’s the bright side: You have up until the day that foreclosure takes place to sell the home on your own. Still, the process of selling your house before foreclosure isn’t easy. Here’s what you need to know.

Can you sell a home if you’re behind on your mortgage?

Whether or not you can sell your house before foreclosure will depend, first and foremost, on whether your house is worth more or less than what you owe on your mortgage.

If you’ve fallen behind on your loan payments but aren’t underwater yet—meaning the fair market value of your home is greater than what you owe on your home loan—you can sell your house and use the profits to pay back your lender.

If you choose to go this route, you’d follow the same steps you’d normally take to sell a home: You’d find a listing agent, accept an offer, and fulfill any contingencies before closing on the sale. Typically, you don’t need to get your lender’s permission to sell your home this way.

However, if your home is worth less than what you owe on your mortgage, you’ll need to sell your property as a short sale to avoid foreclosure. The caveat is that your bank has to be on board with this kind of transaction.

Here’s how a short sale works: Let’s say the bid you get on your home is so low that it won’t cover the total amount you owe on your mortgage. If you accept the offer, you’re going to end up “short” on paying back your lender. That’s OK only if your bank has agreed to accept less than what’s owed on the loan.

Getting your bank’s blessing, however, may be difficult. Since lenders lose money with short sales, they’re not always eager to approve these transactions. But some lenders actually prefer short sales over foreclosing and repossessing homes, since owning and selling property can be huge hassles.

Before approving a short sale, your bank will require you to submit some paperwork, including your offer letter and a “hardship letter” explaining why you can no longer make your mortgage payments, along with financial documents such as income statements or medical bills to back that up. Also, most lenders will have your home appraised to determine if the offer you’ve received is fair. If it is, they may allow the deal to go through—though there may be stipulations.

Indeed, lenders will often counter short sale offers with their own demands in an effort to raise their bottom line. For example, buyers might hear, “We’ll accept your offer, but you’re responsible for all repairs, wire transfers, and notary fees.” It’s ultimately up to you, though, to decide whether you’re willing to absorb these extra costs. The good news: Your real estate agent can help you negotiate these terms with your bank.

As a home seller, a short sale is preferable to foreclosure, since short sales do way less damage to your credit score than a foreclosure. This means you’ll be in better shape to apply for a mortgage and buy a new home down the road. In addition, you get to stay in the home until the sale is completed. (Foreclosures force homeowners to vacate.) You also avoid the shame of having your property repossessed by your bank.

Alternatives to selling your home

If you’ve fallen behind on your mortgage payments but would like to stay in your home, there are a couple of ways you can get back on track. You might qualify for a mortgage forbearance, a process where your servicer gives you a temporary break from your mortgage payments. Think of it as an “extended grace period,” says Guy Cecala, chief executive and publisher of Inside Mortgage Finance.

Another strategy is to negotiate a loan modification, in which case your mortgage lender agrees to let you change the terms of your loan. However, if you choose to modify your mortgage and your lender allows you to skip payments temporarily, those missed payments will be added to your loan’s principal to pay later—meaning this isn’t a get-out-of-jail-free card that lets you walk away from falling behind on your mortgage unscathed.